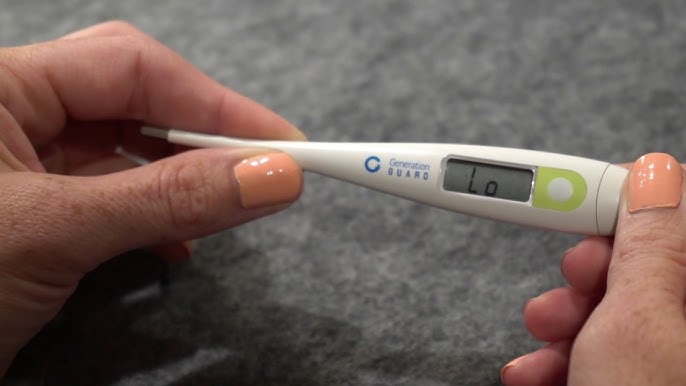 With the symptothermal method, the woman measures her waking temperature (basal temperature) every morning before getting up and examines the condition of the cervical mucus in the days around ovulation. The combination of monitoring the mucus and measuring the basal body temperature can show quite reliably when the woman is ovulating. Additional observation of the cervix or cervix can increase the certainty of determining the time of ovulation. The measured values ​​and observations are noted together in a table.
Measuring the wake-up temperature
The graphic shows an example of the curve for the wake-up temperature over a month.

The waking temperature in the first half of the cycle, i.e., from the beginning of menstrual bleeding until ovulation, corresponds to the average body temperature of around 36.5 degrees Celsius. After ovulation, it rises by at least two-tenths of a degree Celsius and remains that high until the next menstrual period. Measurements are taken in the morning immediately after waking up, even before getting up. Before taking the measurement, the woman should have slept for at least one, or even better, a few hours.

The measurement is taken for at least three minutes and is best done in the vagina or anus. Measurements must always be taken simultaneously and at approximately the same time within a cycle. A simple thermometer is usually sufficient. If you want to use a digital thermometer, you have to ensure that it has two decimal places and that the battery is full. The measuring time of three minutes must also be observed with a digital thermometer because the temperature can still change after the beep.
The slime observation

The mucus that forms in the cervix and can be felt and seen at the entrance to the vagina changes throughout the cycle. At the beginning of the cycle, the vaginal entrance usually feels dry. The cervical mucus is initially milky and cloudy and becomes more straightforward and more explicit days before ovulation. In addition, its texture changes from sticky and tough to liquid and stringy (spinnable like egg white).

If you take some mucus out of the vagina between your index finger and thumb and pull it apart, it becomes clear whether it is clear and spinnable or not. At ovulation, the mucus becomes thick and cloudy again within a short time or disappears altogether.
Determination of the fertile and sterile days

Temperature and mucus monitoring are initially evaluated independently of one another, and the results are then compared. The end of the fertile period can be determined more reliably than the beginning. This also means that if a couple has abstained from sex for a few days and does not have sexual intercourse until the day the basal temperature rises, they have mostly “missed” ovulation.

The beginning of the fertile days is determined by observing the mucus and the temperature curve from the twelve previous cycles. In any case, they begin at the latest when the cervical mucus noticeably liquefies. This is best checked with a finger test. If a cycle calendar for the last twelve months is available, 20 days will be deducted from the shortest cycle. This gives the average number of infertile days at the start of the cycle.

What is the basal body temperature?

What is the basal body temperature curve?

What does the basal temperature say about the fertile days?

The temperature method (i.e., measuring the basal temperature) gives you important clues about your infertility’s good and fertile days in the cycle. If you continuously monitor the basal temperature over a more extended period, you can determine your fertility precisely to the days. The temperature drops and increases again and again: These fluctuations tell you when the chances of pregnancy are good. So you can use the basal body temperature as an aid in family planning.
Do not forget essential micronutrients if you want to have children!

Is the basal temperature increased during ovulation?

The basal temperature changes over the woman’s cycle: it is slightly lower in the first half of the cycle than in the second. Before ovulation, the temperature does not rise, but first drops by around -0.2 ° C. But as soon as you ovulate, the value increases again compared to the average temperature within the next 48 hours. The measured values ​​then increase by 0.2 to 0.5 ° C. This would be the most suitable length of time to get pregnant.
Why does the basal temperature increase after ovulation?

The temperature rise is related to the production of the hormone progesterone (luteal hormone). This is produced in the body after ovulation so that the uterus is prepared for a potential pregnancy.