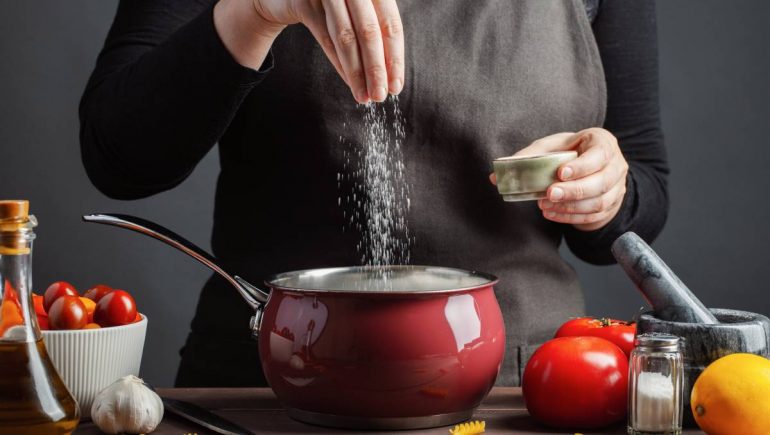 Salt is one of the most common minerals on the planet. Its use in cooking enhances the flavors of food and since ancient times it has been used to preserve food. In addition, sodium chloride – formal name of salt – contains nutrients that make it essential for the water and electrolyte balance of human beings. It is used as a solution to combat dehydration and is a recognized safe food.

However, consuming too much salt has been associated with hypertension and other conditions in the body. The question is, how much would be an excess? Those tasteful fries couldn’t hurt you, if you only ate a few. Much less the sandwich at breakfast, if it only had a slice of ham and a slice of cheese; The cup of canned soup that you had for dinner was the lightest and you didn’t use the salt shaker at all… Does it sound familiar?

Well, many of the foods we eat have added salt, if they are processed even more. Canned and sausages have a good dose and if you add to this the salt used to prepare food, the safest thing is that we will go over the limit and without realizing it.

But the body, always so wise and responsible, is able to give us some signs that we are going overboard with salt. Let’s pay attention to these symptoms in order to take action to avoid consequences that can be serious over time.

Rossana De Jongh Delgado, nutritionist, specialist in clinical nutrition, explains that there are international recommendations on the consumption of salt and these indicate that we should not ingest more than five grams per day, the equivalent of one teaspoon. “It seems like a lot, but if we take into account the amount of salt we ingest in industrial and processed products, plus what we prepare at home, we reach that figure very easily and we can even double it.”

For the expert in overweight and obesity, the first symptom of excess salt consumption is an increased feeling of thirst. “One tends to drink more water to maintain the hydroelectrolyte balance in the body, as the kidneys look for a way to work through urine and we will notice that we are going to go to the bathroom more frequently, but the urine will be more concentrated.”

In addition, the doctor points out that people who consume excess sodium may have headaches, and other alterations linked to the imbalance of sodium and water, such as cramps or they may even have a feeling of trembling in the fingertips.

On the other hand, one of the most notorious signs is fluid retention, which manifests itself with a swelling that is noticeable in that sensation that the rings are tightened, the ankles swell, the socks or pants leave marks on the legs. legs. “This can happen in a healthy and normal person, but also many of the cases of primary arterial hypertension are linked to an excess of sodium. They are arterial hypertensions called sodium dependent and when a person is susceptible to sodium and has high blood pressure, they will maintain these figures even with treatment ”.

Waking up one morning with bags under your eyes and puffy cheeks is a common and noticeable sign that you had too much salt the night before. And when you feel like your food is bland, you are probably already used to consuming too much salt.

De Jongh adds that people who have heart failure problems or kidney problems, when consuming an excess of sodium can have decompensations that translate, for example, into significant respiratory distress, and noticeable swelling that can reach the thighs, for example. what they should avoid consuming too much sodium.
For decades the excessive consumption of salt has been much debated by doctors and government agencies, about its consequences to human health. She has specifically been credited with causing heart disease, stroke, and diabetes.

Some people even state that excessive salt consumption can lead to weight gain. So it has led many people to cut back to have a better state of health.

However, salt is an important mineral for the body because it helps in certain vital processes associated with the nervous system and the regulation of fluids in the body.

In this sense, it knows if the salt is really dangerous, or if it is not, it is harmless to health.

Things to know about consuming too much salt

Why all the fuss about how much salt is consumed?

Our modern obsession with salt intake began in the 1900s

, when French doctors realized that some patients with high blood pressure were consuming diets high in salt.

A few decades later, scientists discovered that they could induce high blood pressure in mice by feeding them a diet high in sodium (a mineral contained in salt).

It was also noted that countries that tended to eat the most salt had the highest rates of high blood pressure and stroke.

This prompted claims that high sodium intake correlates with high blood pressure, as well as obesity. Concluding that everyone should lower their salt intake to preserve health.

However, what had been lost sight of was that a correlation does not imply causality.

Hypertension and its relationship with salt

The argument against the biases of sodium salt began to take shape in 2003, when an extensive review of the literature concluded that there is little evidence of long-term benefit from reduced intake of salt.

Additionally, research published in 2015 found that lower sodium intake may actually be associated with an increased risk of dying from heart disease.