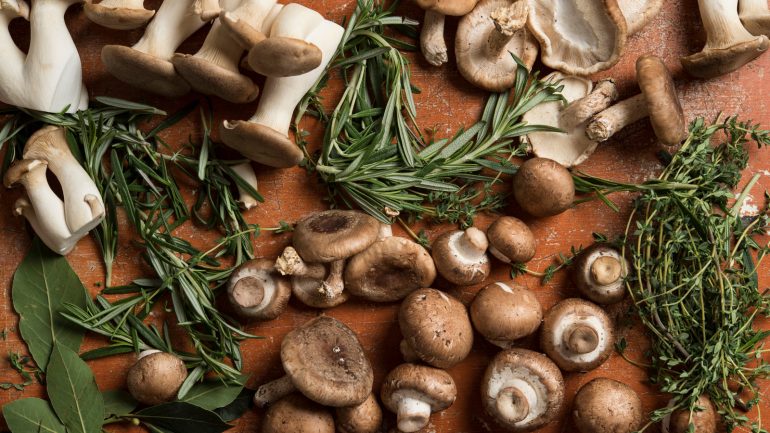 In China and other Asian countries, mushrooms have been highly valued for their nutritional and medicinal properties for many centuries. Above all, Traditional Chinese Medicine has a long tradition of applying them, taking advantage of their favourable effects on health in different diseases. These medicinal mushrooms contain a wide spectrum of components that have a high amount of polysaccharides in common. These polysaccharides, especially beta-glucans, have a special structure that can influence immune function. Apart from polysaccharides, these mushrooms contain many bio-active substances that contribute to their medicinal function: antioxidants, sterols, triterpenes, nucleotides, amino acids, vitamins, and minerals.

The function of medicinal mushrooms

The main curative action of these mushrooms is based on the high amount of active polysaccharides. Especially beta-glucans with a basic structure with 1,3-1,6 bonds that stimulate the defences and are beneficial for various diseases.

The shiitake mushroom (Lentinus edodes) and the oyster mushroom (Pleurotus ostreatus) are considered very rich sources of glucans, in which the lentinan and the pleura, respectively, are recognized as the most potent components. From the maitake mushroom (Grifola frondosa), the D- fraction is considered its main glucan extract, which has beneficial immunomodulatory properties. Another mushroom with many applications and famous for its positive influence on immune function is Cordyceps Sinensis.

In addition, scientific reports have been published mentioning immunomodulation and describing other healing properties such as anti-inflammatory effects and lowering cholesterol levels, blood pressure and blood glucose level.

The diverse variety of medicinal mushrooms have a unique biochemical composition, so it isn’t easy to relate a single component’s nutritional or medicinal function. Scientific trials show that the synergistic function of the intrinsic components and the combination of mushroom extracts are the determining factors for optimal healing effects.

As a result of hypercholesterolemia, arteriosclerotic plaque can form in the coronary arteries, a considerable risk factor for coronary heart disease, the leading cause of death from cardiovascular disease in Europe. Several investigations with maitake mushrooms, oyster mushrooms, shiitake and cordyceps demonstrate a reduction in total cholesterol and serum lipid metabolism. That is why they have a preventive function in the arteriosclerotic process. The positive effects appear to be generated by both the fibrous component and the intrinsic components.

The oyster mushroom contains the synergistic component lovastatin, with a possible inhibitory function of the production of cholesterol by the liver due to the inhibition of the enzyme HMG-CoA-reductase. The cholesterol-lowering function of shiitake is due primarily to the regulation of lipid metabolism by eritadenine. Animal tests have shown that medicinal mushrooms have a lowering effect on blood pressure, influencing a decrease in cardiovascular diseases. The presence of beta-glucans justifies the mechanism of operation of the reduction in blood pressure. Cordyceps and the D- a fraction of maitake also demonstrate a preventive and curative effect in renal hypertension.

Several in vitro tests, animal studies, and clinical trials have shown that medicinal mushrooms have an antidiabetic effect. Pleurotus mushrooms, maitake, and cordyceps show a significant reduction in blood glucose levels. Both anti-hyperglycemic effects and a decrease in insulin resistance and improved blood glucose regulation have been observed. Recent in vitro research has shown hypoglycemic effects through inhibition of the enzyme alpha-glucosidase.

The powerful immunomodulatory function of medicinal mushrooms is mainly attributed to the active polysaccharides and the synergistic function with various ingredients. Through the activation of macrophages, the immune regulatory system initiates a large number of reactions, including:

Vivo and in Vitro research shows that extracts from shiitake, maitake and oyster mushrooms inhibit inflammatory mediators and NF-kB activity, thereby improving gastrointestinal tract inflammations (colitis, Crohn’s). Thanks to these immunomodulatory and anti-inflammatory properties, these extracts play a positive role in the therapy of intestinal inflammations.
Shiitake

Rich in phytonutrients; The benefits of this type of mushroom on the intestinal flora, the cardiovascular system, the immune system, liver function and the nervous system have been described.
Reishi

The latter has an important positive effect on respiratory, cardiovascular and liver function; Its contribution to controlling stress levels has also been demonstrated thanks to its antioxidant functions.
Cordyceps

This type of mushroom is rich in adenosine, a nucleic acid found in ATP, a molecule responsible for energy.
What are the benefits of medicinal mushrooms?
Cordyceps provides benefits on the production of cellular energy.

Studies have described the benefits of the Cordyceps mushroom on cellular energy production, potentially interfering with performance during physical activity since it favours respiratory function and oxygen absorption.

Although these mushrooms are of great health benefit, it is advisable to go to a specialist in the field to specify which is appropriate and not consume more than the recommended dose for each type of person.

Several investigations suggest that the beta-glucans in medicinal mushrooms can improve the symptoms and severity of respiratory tract infections such as asthma, in which the allergic component plays an important role. In another randomized, double-blind, placebo-controlled trial with children with recurrent respiratory tract infections, they measured the anti-allergic effect of beta-glucan extract (pleura); in atopic children, the pleura stabilized the level of immunoglobulin E (IgE) in serum and the number of peripheral eosinophils, both of which are important markers of allergic inflammatory reactions.
The efficacy of the pleura in respiratory tract infections is also proven by a double-blind, placebo-controlled trial of long-distance athletes. Significantly fewer upper respiratory symptoms were observed in the experimental group than in the placebo group. In addition, they demonstrated an increase in Natural Killer cells. Cordyceps also has a wide application about the respiratory tract. Clinical research confirms the positive effects of cordyceps in chronic bronchitis (among others), bronchial asthma and COPD.