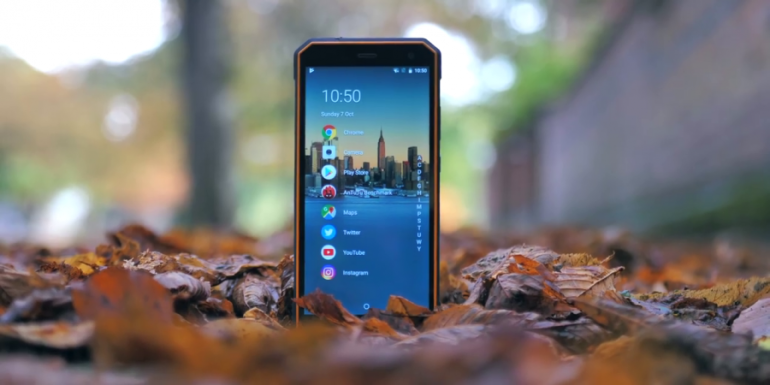 This terminal comes in a cardboard box with the brand name on the top. On the side are the main features of the device. We find the phone at the top wrapped in a plastic case as we open it. In this case, it is the orange model.

Underneath is the card slot key and a manual in several languages. Also, we have the European power charger with 5V/7V/9V at 1.67A output or 12V at 1.25A and a micro-USB type C cable of approximately 1m in length. Like many rugged models, this cable has a slightly longer connector so that it can be inserted into the slot more quickly (since a rubber cap protects the cable entry to prevent water from entering it).

Like many of the Nomu that we have reviewed, this phone is characterized by being a rugged mobile; that is, it is a terminal made of polycarbonate, very thick in appearance, but with protection against falls, dust, and dust. Water.

In this case, this Nomu S50 Pro is a unibody terminal (from which the battery cannot be removed) with 77.5 mm width, 159.5 mm length, and 14.3 mm thickness and weighing 250 grams. In addition, not to vary, it has an IP68 certification that verifies that it is resistant to dust and the prolonged effects of immersion under pressure (of water). On the other hand, it also has the MIL-STD-810G certificate that shows that it has passed a test approved by the United States Department of Defense. This test is based on 28 trials in which the terminal is subjected to extreme conditions.

The viewing angle is 178º, and it looks pretty good. The brightness is also acceptable, but perhaps on sunny days, you have to look for a shadow to see the screen well. The colors on the screen look good, although they are not very bright.
IP68 tested

Something that has caught my attention is that on this front part it has a slight edge that barely protrudes 1 millimeter (perhaps it should be a little larger to try to protect the screen a little more in case of a fall). It does not have front navigation buttons, which will appear on the screen when unlocking the terminal.

The rear area has a plastic and polycarbonate finish to give the device more excellent resistance. The camera is located in the central part, accompanied by a led flash. Just below it is a small fingerprint reader that works well, being quite precise, but it takes two-tenths of a second to unlock. (This is one of the most significant differences between a mid-range terminal and a high-end one).

This Nomu S50 Pro brings clean multilanguage Android 8.1.0 Oreo with the primary Google services. It is a version of “Android Stock” without third-party applications, except those of Google.

Add the Google Play app store, YouTube, Gmail, the DUO video conferencing app, and the Chrome browser. It also includes the FM Radio application natively without the need for the internet, an emergency message application, a file explorer, and an instruction manual in the form of an app.

Apart from the fingerprint reader, this operating system also includes facial unlocking, based on Android 4.4; that is, it is not a facial recognition itself, but given a photograph, it detects the face and unlocks it. That is why this method is not safe. Also, it cannot open me if I wear sunglasses or at night. It works fine, as long as our appearance doesn’t change too much.

And to verify that the terminal is safe and does not have applications that could damage the device, I have run the Malwarebytes antivirus checking that it does not have any malicious apps.

This Nomu S50 Pro has a MediaTek Helio P23 (MT6763V) 8-core processor that works at 2 GHz speed. This chip has several ARM Cortex-A53 structures and an ARM Mali-G71 MP2 GPU graphics card. On the other hand, it has 4GB of LPDDR3 type RAM.

As for storage memory, it has 64GB eMMC 5.1, possibly increasing space by adding an SD card. I have to say that this memory is somewhat faster than the conventional ones, and according to the test to which we have subjected it, the reading speed is 171MB/s, and the writing speed is 137MB/s.

If we remove what the operating system occupies and the applications installed, we are left with 56.29GB for our photos and applications.

As always, to get an idea of the type of mobile we have and to be able to compare it better, we have subjected it to the “AnTuTu Benchmark v7” performance test, which gives us an overall value of the maximum performance that this terminal can provide. The result has been 76,904 points, which indicates that it is a mid-low range terminal.