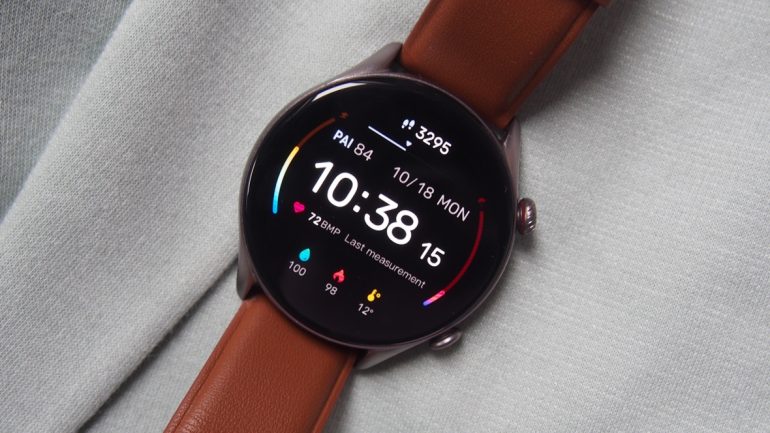 Smartwatches are rapidly displacing Swiss classics, but the analog model design will remain in our hearts for a long time. With the Amazfit GTR 3 Pro round on your wrist, you can go out into the open and train with a bag over your shoulder to walk. Elegant and delicate watch for every day. The thickness is only 10.7mm, above the cuff bulge.

Compared to the GTR 2, the designers have ditched the notches on the bezel, making the GTR 3 look a lot more serious. But there is an inverse effect: if the Classic version differed from the Sport by the steel case before, now only in aluminum. Although, according to the experience of Hi-Tech Mail.ru reviews, glass breaks faster than the body.

In the case of the new model, there are no scratches on the tempered and slightly rounded edges so far. Weight dropped to fully airy 32g, and the watch does not feel in hand. What is very important at night: there is sleep monitoring, and sleeping with thick and heavy “kettles” would be uncomfortable.

The strap is made of leather, easy to remove and change. Width is standard: 22mm; if you switch from “classic” to GTR 3 Pro, you can attach a collection of your favorite bracelets. Brown goes well with bronze gray aluminum. But there is also a brutal black sports version with a fluoroelastomer strap, more resistant to moisture and sweat.

Iconic details here and there. Here are the side buttons. Previously they could only be pressed, and now the top can be rotated. The crown turns with slight vibration; with it, you can navigate through menus, training screens.

The display is also superior: AMOLED with a resolution of 480 × 480 pixels, a brightness of a thousand nits, and support for 60 Hz for fluid animations. Street readability is excellent, and some dials burn constantly. The diameter of the screen is 1.45 inches.

You don’t have to get used to it.

Zepp OS is Zepp Health’s (formerly Huami) operating system, which replaced Amazfit OS. If you had the first and second Amazfit GTR, you don’t have to get used to it, and it looks similar. Even the smartphone app is the same – Zepp. The beginner will quickly understand that the interface is intuitive, so you can still customize it.

But the developers have moved the system far and wide: the operating system weighs 55 MB – Amazfit OS 10 times “easier” and 28 times – watchOS 8. Lower power consumption, longer battery life. Zepp OS can be deployed on weak hardware with a couple of kilobytes of RAM and powerful devices. The operating system skilfully flips through screens and launches programs; it looks cute, shiny but without vulgar Chinese, under the watch’s design. We weren’t expecting anything different from the flagship device.

For Amazfit GTR 3 Pro, there are now more than 100 dials (it was twice less); up to 23 of them are interactive, 15 – animated. Moving images of nebulae and stellar galaxies look incredibly cool. You can adjust individual dial items, display calories, weather, battery life, and other benefits. There is support for animated dials.

To the left of the dials is a summary in the form of cards: weather, SpO2 graph, activity, and much more. It can be customized. Turn from the dial to the right: you will see the details of each item. Clicking on the crown opens a list of all applications. The messages jump from the bottom, from the top: the control panel.

The watch is connected via Bluetooth 5.0 via the Zepp app, available on iOS and Android; the functionality is the same everywhere. Running Forward: iOS works with everything from camera control to downloading music from a smartphone. The friendship between iOS watches and Huawei is not that strong.

Monitor health in all ways

They know how to look a lot. Amazfit GTR 3 Pro quietly merged into a group of premium watches, functionality, at the level of Apple Watch Series 6, Huawei Watch GT2 line, Samsung Galaxy Watch4. With a couple of caveats. For example, the novelty does not support contactless payments, and the curve’s translation denotes Chinese roots. We hope that the second problem will be solved with updates.

The highlight of the program is a new BioTracker 3.0 six-channel optical sensor. The watch can monitor blood oxygen content (SpO2) throughout the day in automatic mode. Previously verified manually, this is bad: the dynamics can not be tracked, so still, wait for 30-60 seconds. Now individual measurements take 15 seconds. The precision is high (declared – 98%), abnormal indicators during the test are not revealed.

In addition, watches have learned to measure respiratory rate. This is especially important during sleep: shortness of breath can indicate fatigue during the day, alcohol exposure, being overweight. As a result, a respiratory arrest can lead to apnea, later memory problems, drowsiness. I usually sleep, the watch confirmed.

By the way, the quality of sleep is measured very accurately. All the versions of the Huawei Watch GT2 that the Amazfit GTR 3 Pro tell me about the lack of deep and light sleep in excess. As a result, I wake up broken, even though I do sleep a bit. Below each item, a footnote: what to do to improve performance. For example, if you can’t rest for 30 minutes, don’t force yourself to do something relaxing and try again. Or remember the pleasant moments.

There is an alarm clock, and the vibration strength can be adjusted. On a smart alarm clock, that in 30 minutes. Before the call wakes you up in a light phase, it is better to be hopeless. But this function still does not generally work on any watch, too individually.

With the precision of the voltage measurement (here translated as “Voltage”), there is also the order: 97% of the time, I am at rest, sometimes it jumps to “normal.” I’m not nervous and sorry. Steps taken, calories burned, heart rate – all this Amazfit GTR 3 Pro is measured at the level of Apple Watch 5 and Huawei Watch GT2, which I have used for a long time. You may believe this but remember: this is not a medical device. However, the evidence may encourage you to see a doctor.

Extremely convenient option – one-touch measurement of health indicators. Get started, wait 45 seconds, and get a summary: current heart rate, stress level, SpO2, and respiratory rate. When you don’t feel good about your body, you can assess the situation so sparingly instead of wandering through the menu and measuring each item separately.

Time, music control on a smartphone, timer, and stopwatch, search on the smartphone – the basis of the basics, without it, even in bracelets for a couple of thousand nowhere. But there are some handy functions.

Calls. Amazfit GTR 3 Pro does not support eSIM, so the call goes to the smartphone, and you can reject or answer from the watch. Microphone, speaker. The quality is excellent, and I tested it with the interlocutor; they are both satisfied. Clock messages can only be received; they cannot be answered. Cyrillic is read; usually, the font is large.